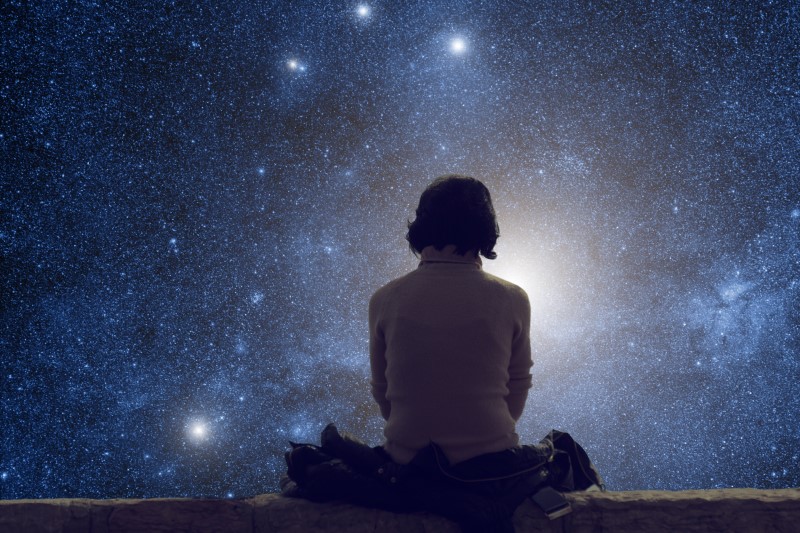 Pluto has shifted into Gate 61 – the Gate of Universal Truth – and his transformational message is all about the changing nature of reality.

We have stumbled into the era of ‘fake news’, and we can blame Pluto for that.

Trumpeting the phrase repeatedly in an attempt to confuse the distinction between truth and lies has become a daily political ploy in the USA, and increasingly in other places where democracy is under threat.

Fake news is not entirely new. Hannah Arendt described ‘post-truthism’ as a fundamental feature of the rise of nazism in Europe in the 20th century. That was a warning shot, to alert us to the ways in which reality can be co-opted, at the expense of the many, for the benefit of the few.

What’s Pluto got to do with this? Pluto is all about the use of power. Astrologically, he’s also got a lot to do with oligarchs, dark money, big data and hidden means (think collusion). The word PLUTOCRACY actually means ‘government by the wealthy’.

Pluto is digging deep into our souls to teach us how we have been giving away our personal power to authority figures. Allowing others to define our reality leaves us with no option but a kind of social slavery. It leaves us open to being plundered by any oligarch prepared to point out how we should live our lives.

Between now and 2022, this will change. Simply because, cosmic reality is shifting and there is NOTHING those wielding the old version of authority can do about it. On the flip side, you and I have to step up, because daddy’s time as head of the cosmic household is done.

This change is likely to bring our culture and society crashing around our feet. What do you want to create in it’s place?

Pluto is the gateway to Universal Creation

When you and I were at school, Pluto was right at the edge of our solar system. Not anymore. In 2005 we discovered that Pluto was not a planet like the others we know and love – Neptune, Uranus, Jupiter.

It turns out that his family lives in deep space. These dwarf planets (also known as Plutinos) orbit around our Sun but can take up to 12,000 years to do so.

When Pluto was at the boundary of our world we believed in transformation as death and rebirth. We had to suffer through the underworld to get to the other side. These new dwarf planets are not at all interested in suffering. They are all about the awesome power of Universal Creation, and what we humans need to understand about applying it in our lives.

More on Pluto’s role as the Heart of the Cosmos here.

The Power of Inner Truth

Pluto sets the background energy for massive transformation. It is usually initiated by one or two people, breaks into the collective and plays out in the lives of each one of us. Think Steve Jobs and the digital revolution. Hitler and WWII. Elizabeth Cady Stanton, Susan B. Anthony and the suffragette movement. Donald Trump and democracy.

After 8 years in the Root Centre, (and here ) Pluto is now up in the Head Centre. This is a profoundly new and different kind of transformative energy. Pluto was last in the Head Centre in 1963 – 65, when it was travelling in conjunction with Uranus. We all know how that turned out!

The next few years represent a culmination of the cultural upheaval of the 1960’s.

Pluto in the Head Centre

The Root Centre is all about surviving and thriving. It’s an invitation, a physical impulse, to engage with life. Since 2010 we have been transforming our relationship with the material world, gradually learning how powerful we are to manifest real embodied change, both for ourselves and collectively. It’s not been easy.

The Head Centre is the only center in our Human Design chart that sits outside our body. It opens us up to content from outside our human personality, inspiring us to realisations that create entirely new personal maps of meaning.

Pluto draws us away from what’s safe and comfortable,  slowly and inexorably breaking down our existing stories and creating them anew.  It’s essence is the surrender of the lower self to transformation at the Soul level, and to make our efforts count towards  our higher collective purpose.


The birthing of an individual out of the womb of his previous forms of containment (no matter how secure and comfortable) is absolutely essential for evolutionary development.

Over the next 3 years, Pluto is breaking down our existing ideas about mind, brain and consciousness. He is teaching us a whole new way to use our powerful creative intelligence.

The Gate of Inner Truth

Gate 61 is the gate of Inner Truth.

We are all a bit confused just now about what is true. It used to be obvious, there were people and sources we could trust. Our parents, our leaders, our community.

Now, it’s not so clear. It’s as if the truth has fragmented into a gazillion tiny shards and we can no longer grasp hold of it.

This is, as is the way of evolution, a necessary disintegration. And it is all about how we structure reality.

One beautiful summers day I was sitting by the water with my two sisters. They were arguing.

Sister #1: This is the most beautiful water we’ve ever seen. The colour is gorgeous!

Sister #2: No, it’s not! The most beautiful water we’ve ever seen was at that beach last year, don’t you remember?

I hear people all the time, fighting to maintain their reality in the face of someone else not sharing it. It’s an object-oriented way of perceiving the world, not allowing for subtle personal differences in experience. It’s served well as a way to stay safe. But now, that need for approval, acceptance, instant rapport, is blocking our evolutionary progress.

From Cartesian to Quantum

Possibly the most fundamental shift in modern science is the discovery that our material world is shaped by the observer.

Here, in a nutshell, is what Pluto in Gate 61 is bringing to us. You have a unique and individual way of understanding the world – your world. Your perceptions are unique. Your responses to what you perceive are unique. You create and experience your world through your personal observation.

When I talk about TRUTH in Gate 61, I am not talking about some objective shared truth that you need permission for. Neither am I talking about philosophy’s relative post-modern truth.

The Inner Truth of Gate 61 in Human Design is about an integrated, coherent multi-awareness intelligence that perceives personal truth that has meaning in the moment.

We are not here to try to convince others of our truth, but to share, and inspire them. We are not looking for a truth hierarchy where this fact is more important than that one, but for a net of conscious awareness.

In fact, this kind of truth can be rigorously logical, or whimsical and fancy-free.

We are shifting from a one-reality world to a multi-reality world, where your unique perception and response is an integral and indispensable part of the creative whole.

The Pulse of Laminated Space-Time

Have you ever watched an old movie? One of those where you can see the frames shifting, one after the other? Although it looks smooth to us, underneath lies a series of discontinuous moments, strung together like pearls.

Scientists have discovered that life is like that too. Barbara Dewey calls it Laminated Space Time and because I like that description, I will too. It works like this:

Each moment, about 40 times per second, your mind drops into the quantum field, and then back into your everyday reality. The quantum field is pure potential. You turn up there with your unique way of perceiving and responding, dance with the flow a bit, and then return. It all takes just a nano-moment.

In our nano-moments in the quantum realm we are in a space-less and time-less condition, capable of creating the entire cosmos. Then we return to our material world, limited by the dimensions of space and time. This is not a metaphor. There is substantial scientific evidence to support the idea that this is what your mind is doing, right now, even as you are reading this blog post.

The Pulse of Consciousness

The Individual Circuitry in Human Design carries a ‘format energy’ of pulsing. Which means, it’s always shifting between one pole and the other, gradually integrating the two.

Mutation feels the pressure for innovation and renewal, it happens suddenly, unexpectedly, in the gaps or spaces between the pulses. It is marked by alternating chaos and order, the very source of creativity itself.

A Complete Guide to Circuits, Channels and Gates, Richard Rudd, 2003.

So, Pluto in Gate 61 activates the pulsing energy of chaos/order within the field of humanity. It is the mutative field at the mental level, pulsing back and forth between quantum potential/material reality.

Taking off our Creative Training Wheels

In the old material reality, religion had us convinced that we did not have access to the vast creative potential of the universe. We needed intermediaries, someone who knew better than us and could keep us safe. But now our training wheels are off, and Pluto is releasing us from those religious bonds, and into our infancy as co-creators.

The purpose of all this creation is for life/mind/consciousness to experience itself within it’s own creative acts and have those experiences reflected back so that consciousness can grow.

The old spiritual traditions separated spirit from body, but now, realising consciousness is about producing, in physical form, a mirror image of its internal creation so it can witness itself at play.

How cool is that?

The Net of Consciousness

I’ve written before about the Matrix of Brilliance we are creating. The most recent science indicates that the most fundamental thing in our universe and beyond is consciousness. More fundamental than matter, energy, space and time.


I have come to believe more and more strongly that the universe is put together with an ingenuity so astonishing that I cannot accept it merely as brute fact.

I have come to the point of view that mind – i.e., conscious awareness of the world – is not a meaningless and incidental quirk of nature, but an absolutely fundamental facet of reality.


American physicist Paul Davies, The Mind of God: The Scientific Basis for a Rational World

Pluto in Gate 61 is the beginning pulse of our cosmic co-creativity coming into conscious play. We are weaving a net of consciousness from our unique personal perceptions and responses. To do this we must draw our attention away from seeking safety in intermediaries, and learn to trust in our emerging cosmic intelligence.

We must learn that we are not a ‘brain in a box’ with a body attached, but that we have so many forms of intelligence we have as yet been incapable of utilising them all. The next three years will show us how reality shifts as we build a conscious relationship with both our own intelligence and the quantum field.

Designed by: On The Farm Creative Services
| © Love Your Design 2023