Some people are born with a karmic mission to influence events on a grand scale. Donald Trump is certainly one of them. Whatever you think of him, his singular capacity to keep the media of an entire nation fed with a constant flow of chaos and crisis is impressive. But like many people, I’ve been wondering just how far all the chaos and crisis might go.

Yesterday’s eclipse tipped something in the Donald’s brain. The Sun was in the Gate of the Army, Mars was heavily involved. Both evoke military responses. Trump was right on it! I saw the news referring to threats from North Korea and there’s no doubting that they are busy building a nuclear arsenal. But as the saying goes, it takes two to tango and Kim Jong-un is finding Trump to be such a fabulously exciting enemy. He has been busy creating his own personal war, and wants to take us all along for the ride.

The eclipse brought us a clear message to take some time out and address old family patterns that have, in the past, lead to defensive reactions. It was a de-militarisation zone. Trump chose the other option – double up on the militarisation, build the wall higher, increase the threats against the supposed enemy. Rather than de-escalate, as many of us were doing on a personal level, Trump grabbed his thunderbolt, Zeus-like, and took to the battle ground with zest.

I was going to call this post Donald Trump WTF! after seeing him threatening to rain fire and fury on Kim Jong-un (but mostly putting Guam, South Korea and Japan on the line). If you missed it:

Trump is a double manifestor. If you try to block him, he just switches to the other channel and gets on with his agenda. He has a 1/3 profile, and lives by trial and error. Nuclear war? What the heck go ahead and try it out! It might be fun! 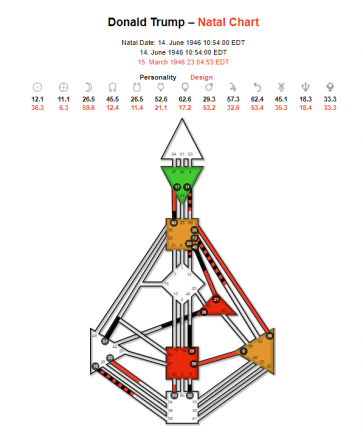 Mars (military) is transiting right on top of Trump’s Pluto (nuclear power) in Gate 33 right now. This evokes suppressed rage. Deeply buried anger rises to the surface. We can also see the current Pluto transit in Gate 54 impacting on his Design Jupiter (expansion). A BIG (Jupiter) military response (Mars) using nuclear weapons (Pluto) seems obvious to him. His other option was to retreat and do some self reflection, but that’s not in his playbook.

We can really see what’s going on if we look at Trump’s Holographic Human Design chart.

The Sun is transiting over his Mars in the Gate of the Army (7). Wait, MORE Mars military energy? Yes. AND. This week’s Lunar Eclipse fell directly on that Mars activation.

Mars and Pluto can also indicate sudden violent endings. So, we are looking at a military option that will bring things to a completion. Fire and fury like the world has never seen … it fits the bill.

It’s not the only endings Trump has activated in his design.

His Personality Sun is in Gate 12 – Gate of Blockages. Let’s hear from Hilary Barrett about this gate:

Some people are a consistently, exclusively and pathologically negative influence and sabotage all attempts at progress…. perceiving others as not real people, explaining their behaviour with labels and stereotypes rather than seeking to understand. There is a complete failure of empathy.

Now I just want to say some of my favourite people have Gate 12, and this isn’t a description I would apply to them, it is what we might call the negative manifestation or shadow aspect.

It’s the underlying asteroid layer that I find particularly interesting. Trump has three asteroids in Gate 12 – Asbolus, Atropos and Vulcan. Any asteroid in the same gate as your Personality Sun is indicative of core personality traits. Let’s explore these three more deeply.

Asbolus people tend to be serious, even bitter arising from a belief that they have done so much to help others and yet their efforts are unappreciated.

Asbolus is linked to a drive for vengeance for a perceived slight to the object of love and devotion. What that object could be in Trump’s case warrants an entire post on it’s own – the ‘forgotten people’ who make up a large percentage of his base? The America of his imagination, which he is sacrificing his own easy life to make great again? It’s hard to tell. Whatever it is, Asbolus will not countenance the love object being threatened and will respond.

Atropos is one of the three fates – the one who cuts the cord of life. She is, in fact the Fate of Death. People who have Atropos in a significant position in their chart experience sudden endings, and have a tendency to do what needs to be done to conclude things. I’m thinking the Affordable Care Act, for example. Let’s kill it!!

Today, that tendency takes on an even darker hue. In conjunction with the Mars and Pluto energy of sudden violent nuclear military response, we have a tendency to bring things quickly to a conclusion to assuage a wound to his capacity to keep his ‘people’ safe. Trump is responding with all his suppressed rage to a threat to his love object – America or whatever – by threatening to bring this threatening behaviour to an end regardless of the consequences.

What matters is not the diplomacy of getting good outcomes for all, or even for the USA and her people. What matters is avenging his own woundedness.

Vulcan is volcanic, bringing a surge of power (notice Trump adds power to his ‘fire and fury’ rhetoric).

There is one light here. Atropos brings things to an ending. There is no doubt that Trump is rapidly bringing our familiar western democratic system to an end. Hopefully these statements may also bring a sudden end to his career as a politician!

One last activation in the asteroid layer which plays out in Trump’s actions today. His Zeus is in Gate 4 – the young fool who doesn’t listen to advice. No surprise there! Zeus is the self-appointed Head God on Mount Olympus who throws thunderbolts at those who annoy him. Fire and fury indeed!

Neptune and the North Node are activating this Zeus activation and the Sun will be there from 11th August. You can be sure that Trump is acting the fool and not taking advice from his military experts on this issue. At the same time, Jupiter (expansion) is transiting in Gate 57 is sitting right on top of Zeus. This means Zeus is very busy as an active archetype in Trump’s life right now. The most significant ideas Zeus brings to the current narrative are:

So we have sudden endings (Atropos) to threats towards the beloved (Asbolus), brought about by military(Mars)  nuclear (Pluto) means to protect a personal wound (Asbolus). The response is volcanic (Vulcan), thunderous (Zeus).

Let’s hope for the sake of us all that it comes to just a bunch of hot air.